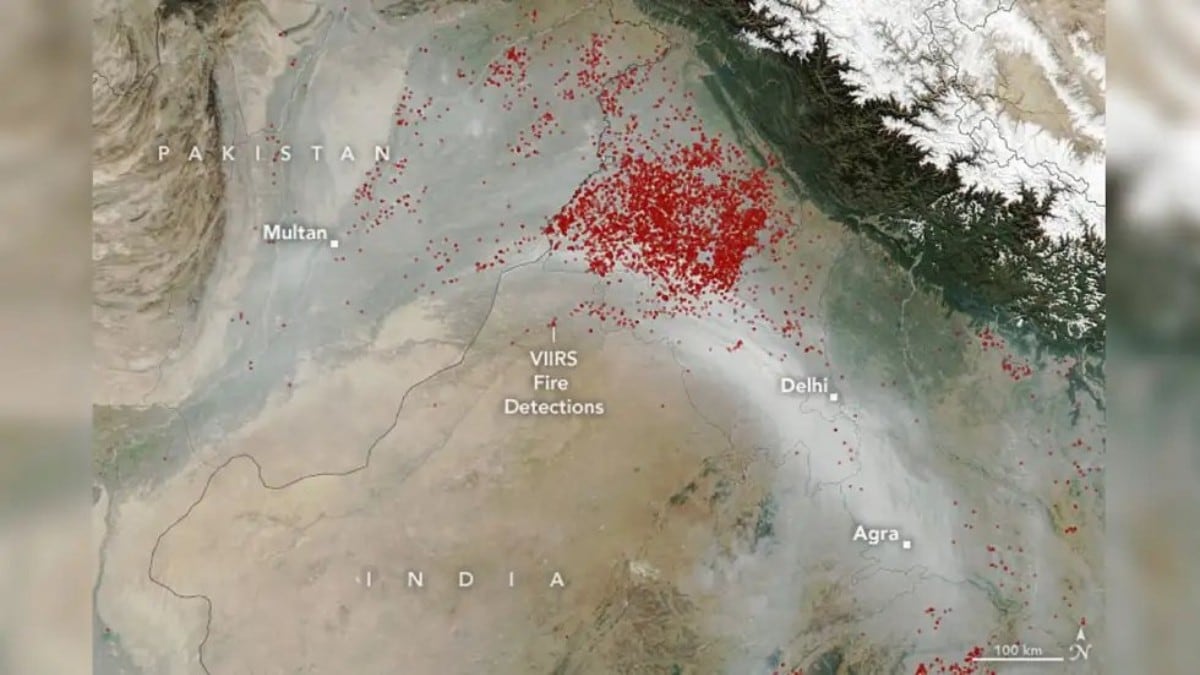 Air pollution in the Delhi-NCR region has been an alarming problem over the years. The pollution level rises significantly during winters, covering the city with thick fog. A new NASA discovery has identified a cause of this problem. Images tweeted by The Weather Channel India show that stubble burning activities in neighboring states partly cause pollution in the region. Satellite images captured by NASA show stubble plumes moving from these states towards Delhi-NCR. The caption of the photo read, “Every winter, pollution in Delhi rises very rapidly, partly due to stubble burning activities in neighboring states. Now, NASA has captured satellite images showing Delhi moving towards The feathers of the stubble are visible.”

Weather Channel India has told about the process of stubble burning. Farmers usually burn their crop residues to prepare the fields for the next season. “This annual activity is further exacerbated by repeated seasonal pollution,” the tweet read.

every winter, #Delhi Pollution There has been a rapid increase partly due to stubble burning activities in neighboring states.

#stubble burning It is the process by which farmers burn crop residues to make room for a new batch of crops. This annual activity leads to an increase in recurring seasonal pollution.

images captured by NASA Picture a “river of smoke” emanating from crop residues burnt in Punjab and Haryana. It extends towards Delhi.

images captured by @NASA underline the magnitude of #stubble burning problem by depicting a vast ‘river of smoke’ emanating from the fires in Punjab, Haryana and even northern Pakistan, which extends towards Delhi.

Often, there is also an increase in air pollution due to low air currents during this season. However, this year’s sluggish monsoon helped control the rise in pollution levels in early November. But after that the pollution increased. As of November 16, NASA has identified more than 74,000 fire hotspots in Punjab.

The NASA update also pointed out that this year’s sluggish monsoon curbed the rise in pollution levels during early November.

But from November 11 onwards, with VIIRS recording > 74,000 fire hotspots in Punjab till November 16, the fire activities gained momentum.

USRA scientist Pawan Gupta of NASA’s Marshall Space Flight Center talks about pollution levels on Nov. “A conservative estimate is that at least 22 million people were affected by the smoke in this one day,” he said.

“Given the size of the plume on November 11 and the population density in the region, I would say a conservative estimate is that at least 22 million people were affected by the smoke on this day,” said USRA scientist Pawan Gupta. at NASA’s Marshall Space Flight Center.

During winter the process of stubble burning accelerates and hence pollution increases.

The arrival of winter months coincides with the stubble burning activity carried out by farmers in neighboring states. This exacerbates the pollution woes of the land-locked capital region formerly bordering the Himalayan foothills.

The tweet thread states that due to the drop in temperature and lack of winds in the winter months, air pollutants are trapped in the atmosphere for a longer time. Ultimately, this leads to various health hazards.

Due to fall in mercury level, lack of winds, etc., pollutants get trapped in the atmosphere for longer than normal.

This combined effect makes Delhi’s air quality dangerous even for healthy people, while seriously affecting those with the breathing condition.

Delhi’s pollution has become a matter of concern this year as well.