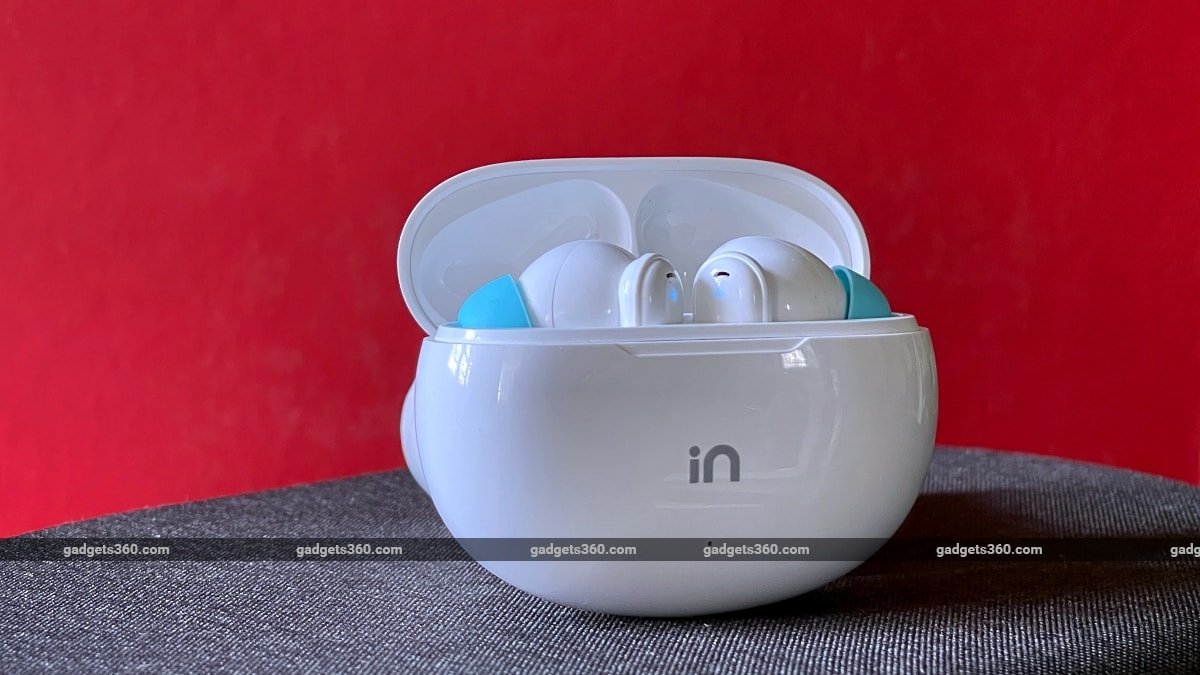 Micromax has been making smartphones for a while, but TWS only recently entered the market when it launchEd Its 2b. In ,Review) smart Fone. The company launched two pairs of true wireless earphones and I have the more expensive AirFunk 1 Pro, aimed at entry-level buyers. Priced at Rs 2,499 it covers the basics in terms of audio quality and functionality in a simple looking package.

Micromax Airfunk 1 Pro is available in five colours: Black, Blue, White, Yellow and Red. I received a white review unit, which has blue silicone ear tips (and two more pairs of tips in different sizes but the same color are included in the package). Taking the charging case out of the retail box, I noticed several scratches as it was not wrapped in plastic. The case has a glossy finish that attracts a lot of fingerprints, dust, and pocket lint. The edges of the case cover are quite sharp and can pinch your fingers while taking it off.

However, the case is easy to open and close with one hand. What I liked about the Pebble-shaped case is how small it is overall, making it easy to fit into the watch pocket of a regular pair of jeans. There’s a Type-C port on the bottom, and the case can stand upright with or without the earphones. There’s a single LED on the case that shows the battery status when the charger is plugged in.

The IP44-rated earpieces have bulbous heads that house the drivers and electronics, and short, flattened stems at the other end. They have the same glossy finish as the case, with similar build quality including some sharp edges, though they usually don’t touch the wearer’s ear lobes, so this isn’t as much of a concern.

What bothers me most about the Airfunk 1 Pro’s design is the way the earpieces need to be held in place in the charging case. They are positioned fairly deep within the narrow opening, and their glossy finish makes the top quite difficult to hold when you need to take them out. In most cases I had to pinch the silicone ear tips to get them out.

Since there is no pairing button, taking both the earphones out of the case puts them into pairing mode. It remains active (indicated by a blinking LED on each earpiece) for about three minutes, unless they have already been paired with another device. To pair them with a new source, simply take both earphones out of the case and disconnect from the previous device, after which they will automatically enter pairing mode. In fact, a simple button on the case would have made the pairing process a lot easier.

Taking slippery earpieces out of case can be troublesome

Touch controls are simple. Double-tap the stem on either earpiece to pause or play music, and triple-tap left or right to skip to the previous or next track. Long press on any earpiece to invoke your paired phone’s voice assistant. A single tap on the left or right earpiece will increase or decrease the volume respectively. All of these gestures worked surprisingly well for low-cost true wireless earphones. There’s no companion app so there’s no way to customize the touch controls.

Micromax Airfunk 1 Pro has a single 13mm dynamic driver in each earpiece. Each also houses a Qualcomm QCC3040 SoC, which enables Bluetooth 5.2 connectivity. The earphones support AAC, SBC and Qualcomm aptX Bluetooth codecs. There is also IP44 dust and water resistance for the earphones.

Battery life is where the AirFunk 1 Pro earphones excel

The battery life of the Micromax Airfunk 1 Pro was impressive. With support for AAC, I connected it most of the time to an iPhone and several times to an Android smartphone to test its support for aptX. I managed to get around 7 hours of use out of the earpieces, and the case can fully charge them around 4-5 times, bringing the total runtime to around 28-35 hours. This is close to what Micromax claims. Charging the earphones was also fairly quick, with the earphones taking a little over an hour to fully charge the case.

Listening to Honeypy by Johnny, it’s easy to tell that the soundstage is quite narrow and not as airy as it should be. Switching to some slow tempo, like Juice World’s Righteous, it becomes clear that the emphasis is on bass frequencies, which isn’t surprising for a budget pair of earphones. Nevertheless, the vocals come out clearly, and are by no means repressed. While bass frequencies come out well (albeit a little muddy) the highs aren’t all that crisp. Overall, there’s little to complain about for its price, but you can get a better, wider soundstage from Xiaomi’s dual-driver setup. redmi earbuds 3 pro ,Review) which cost Rs. 2,999

Gaming was not a problem with these earphones, and they kept up with all the tasks during my Call of Duty: Mobile deathmatch tournaments. The audio lag was also minimal while watching movies. Micromax Airfunk 1 Pro has done a good job in terms of range. Audio quality was clear up to about 8.5 meters from the source device, and I could go a little further provided there were no obstacles. However, if I went through a door or walked in such a way that a wall was in the middle, the audio literally cut out, and the earphones struggled to reconnect.

Voice on calls were not clear at all, but I never got any complaints about my voice from people on the other end. This was quite surprising as most of the TWS earphones in this price range do not work so well. Environmental noise cancellation (ENC) was good enough to suppress the noise around me, including some hammers from a nearby construction site and a table fan behind me.

Audio performance aside, the AirFunk 1 Pro’s earpieces are quite small and each is very light at just 4g. I could keep them in my ears all day and almost forget I was wearing them. The earphones also have an IP44 rating which indicates that they are somewhat protected from dust and splashes, so it’s fine to use them during a light drizzle or for sweaty workouts.

The Micromax Airfunk 1 Pro was pretty good at things that mattered when using a pair of TWS earphones. The audio quality is the best, which is reasonable considering its price. Voice quality is fine, with good noise suppression. However, the battery life really impressed me, both for the earpiece as well as the charging case. Touch controls for volume are also good.

What disappointed me the most was the overall build quality with sharp edges on the case and earphones. 2,499 in India, the AirFunk 1 Pro offers good value for someone who is looking for a good pair of entry-level TWS earphones on a tight budget. If you’re willing to spend a little more, Xiaomi’s redmi earbuds 3 pro ,Review) with easy pairing buttons provide better sound and better build quality.